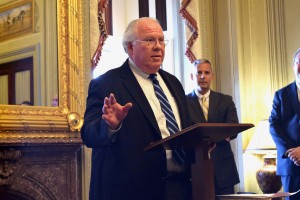 “On behalf of the firms and men and women who design, build, maintain and manage the nation’s transportation infrastructure—who weren’t invited to participate in this morning’s Ways & Means Committee hearing—I would like to say what we want is a long-term funding solution.

“And by long-term, we don’t mean a four- to six-year patch. Because that would leave us at the end of the next authorization exactly where we are now, facing a $16 billion per year-plus funding cliff. We want a solution that puts this critical national program back on solid financial footing for at least the next decade.

“And anyone who thinks it will be any easier to find loose change under the cushions for this program in four to six years from now than it is today has been spending too much time in Colorado.

“Congressman Blumenauer’s proposal meets our goal. But it is going to take bipartisan cooperation and shared bipartisan risk to get the job done.

“It’s time both parties to work together for America and get this behind us.”