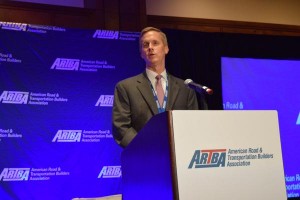 He is the third generation Zachry in the company founded by his grandfather, H.B. “Pat” Zachry, in 1924.  Today, the San Antonio-based firm builds technically-unique, large-scale projects around the world with high integrity and innovation. Highways, bridges, waterways, museums, music halls, hotels, and hospitals are among the company’s many projects that provide noteworthy infrastructure solutions.

He is the current chair of the steering committee of the Construction Industry Ethics & Compliance Initiative. Zachry also serves on the Texas A&M Civil Engineering Advisory Council, and on the boards of the Southwest Research Institute and the Associated General Contractors of America.

In Philadelphia, Zachry outlined several key goals for the year ahead as ARTBA chairman.

Most importantly, he said, ARTBA will remain laser-focused on its mission of ensuring a long-term Highway Trust Fund fix and congressional approval of a multi-year bill that boosts federal surface transportation investment. The association will also advocate for increased federal investment in airport construction as part of the reauthorization of the nation’s aviation programs.

Zachry pledged to build the number of firms and organizations supporting the “Transportation Makes America Work” lobbying and advocacy communications program to help ensure the industry has the financial muscle to achieve its legislative goals.

Second, Zachry said the association would be expanding the scope of its training initiatives with development of new accredited, national road and bridge safety certification programs.

Third, he plans to implement the recommendations in the report put forward in Philadelphia by the ARTBA Young Executive Leadership Task Force that are aimed at more fully engaging the next generation of industry leaders in supporting the association’s advocacy mission and providing them with new leadership opportunities.

Fourth, Zachry stressed the importance of ARTBA’s ongoing efforts to support the professional development of women in the industry, and to recruit more women and students to consider transportation construction careers.

Finally, Zachry will initiate a new wave of outreach to expand ARTBA’s membership, build its grassroots army and get members more involved.

Zachry holds a B.S. in civil engineering from Texas A&M University and an M.B.A. from the University of Texas at Austin. He served three years active duty in the United States Army, including domestic and international assignments and Airborne School.

He and his wife and three children live in San Antonio, where he has served on several local boards and mayor’s committees and is actively involved in numerous charitable organizations.