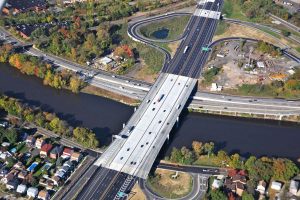 (WASHINGTON) – On the 46th annual Earth Day observance April 22, the men and women of the U.S. transportation design and construction industry remain committed to protecting the environment while also providing good jobs, economic development opportunities, and safe and efficient travel for the nation.

The American Road & Transportation Builders Association (ARTBA) and its 6,500 members work every day in partnership with state transportation agencies and other stakeholders to develop and use green technologies, innovative project design and construction techniques, cleaner-burning fuels, and intensive efforts to recover, reprocess and reuse materials.

Just last month, the U.S. Environmental Protection Agency issued a report touting how the Diesel Emission Reduction Act (DERA) has improved public health by removing more than 335,200 tons of nitrogen oxides and 14,700 tons of particulate matter from the air. ARTBA has been a consistent supporter of the DERA program, recognizing its ability to benefit both transportation construction and the environment.

Perhaps the best examples of where ARTBA member firms demonstrate their commitment to the environment are the infrastructure projects that Americans depend on every day:

And that’s not all the good news. According to U.S. Department of Transportation data:

ARTBA believes the ability of the public and private sectors to continue making environmental progress in the transportation arena is dependent, in large measure, on having reliable federal highway, public transit and bridge programs that provide states with the resources they need to make infrastructure improvements that add capacity, increase mobility, and therefore reduce emissions levels.

Providing such a permanent solution remains the paramount transportation challenge for Congress to resolve before the FAST Act expires and will be critical to the ability of state governments to make future highway and transit investments that contribute to a “greener and cleaner” environment.