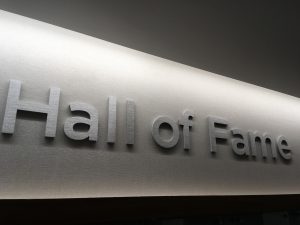 (WASHINGTON)—A Massachusetts transportation contractor, a Virginia-based engineer, and the long-time chief of the federal Bureau of Public Roads are the 2017 inductees for the American Road & Transportation Builders Association (ARTBA) Foundation’s “Transportation Development Hall of Fame.”

Launched in 2010, the “Hall of Fame” honors individuals or families from the public and private sectors who have made extraordinary contributions to U.S. transportation development during their careers.  A committee of judges comprised of construction industry journalists annually reviews nominees in two categories:

A straight shooter with a “can do” attitude, Ken Rezendes began his business in 1956, with small excavating jobs and his 1949 Ford dump truck.  Family-owned and operated, the business has grown to become one of the commonwealth’s most successful firms specializing in highway construction and reconstruction, water, sewer and utility work, and complete building and site excavation services.  The firm has 100 employees.

His roster of leadership positions with national and state construction organizations is distinguished.  It includes serving as ARTBA chairman (1994), senior vice chairman, first vice chairman, northeastern region vice chairman, and Contractors Division president.  He spent a decade as an ARTBA Foundation trustee and chaired several association task forces on key financial and operational issues.  As the co-chair of the ARTBA Political Action Committee for the last 20 years, he’s helped raise more than $1 million.  At the state level, Rezendes served as the 1983-84 chairman of the Construction Industries of Massachusetts.

His commitment to giving back to his community is equally impressive.  He established the Gladys M. Rezendes Memorial Scholarship in memory of his late wife and has awarded nearly $200,000 in scholarships to high school students. Rezendes was an executive member of the Charlton Memorial Hospital President’s Council in Fall River, Mass., and is a current member of the Board of Directors for the Fall River Boys & Girls Club.

A registered professional engineer in multiple states and D.C., Max Sproles began his career in 1958 at the federal Bureau of Public Roads—today’s Federal Highway Administration.  He later held several key management positions with the North Carolina State Highway Commission.  In 1970, he joined the Association of American Railroads (AAR).  As AAR’s executive director for highway-rail programs, he played a key leadership role in the passage of a 1973 law that funded upgraded rail crossings – estimated to have helped save 1,000 lives annually.  He later spent 10 years as a vice president with Deleuw Cather and another decade with Frederic R. Harris.  He also was a senior vice president with the international infrastructure company, AECOM.

Sproles was a fixture at ARTBA’s annual meeting for more than 40 years. As 1997 ARTBA chairman, he met with President Bill Clinton to highlight the importance of increasing federal highway and public transit investment as part of the next reauthorization bill.

His other volunteer ARTBA leadership roles included: senior vice chairman, regional vice chairman, co-chairman of the Russian Project Advisory Committee, Planning & Design Division president, and chairman of the Railroads Advisory Council.  Sproles spent more than two decades as a member of the AASHTO-AGC-ARTBA Joint Committee.  Until his passing, he also was the long-time chairman of the ARTBA Tellers Committee, which was responsible for counting the votes and certifying the annual election results for ARTBA’s officers and directors.

Sproles received the 1998 ARTBA Award—the association’s highest honor—in recognition of his leadership in the passage of the June 1998 TEA-21 surface transportation law.  He was elected a fellow of the Institute of Transportation Engineers and the American Society of Civil Engineers.  Sproles served as a member of Virginia Tech’s Civil and Environmental Engineering Alumni Board and the department’s advisory board, as well as the university’s Center for Transportation Research Advisory Board.

MacDonald was called the “man of the century” in highway development and his pioneering 35 years as head of the Bureau of Public Roads under seven U.S. presidents were critical to creating and refining today’s federal highway program that gave Americans unprecedented mobility.

A civil engineer, he became Iowa’s chief engineer in 1913 and was a key figure in the development of the 1916 Federal-Aid Road Act, a landmark law that provided the basis for the federal government’s leadership in highway construction. On July 1, 1919, he was appointed “Chief of the Bureau.”  His title and the agency name would change several times, but he would retain the nickname “The Chief” until his retirement in 1953.

Early in his tenure, MacDonald revised the program and saw enactment of 1921 legislation that incorporated his innovation of limiting federal funds to a designated federal-aid system.  His work in the 1930s and 1940s helped establish the foundation of the U.S. Interstate Highway System.  In total, he supervised the creation of 3.5 million miles of highways.

Established in 1985, the ARTBA Foundation is a 501(c) 3 tax-exempt entity designed to “promote research, education and public awareness” about the impacts of transportation investment. The Foundation supports an array of initiatives, including educational scholarships, awards, professional development academies, a transportation project safety certification program, roadway work zone safety and training, special economic reports and an exhibition on transportation at the Smithsonian National Museum of American History.