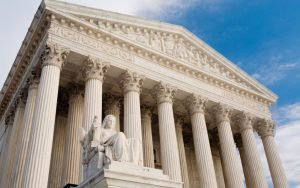 (WASHINGTON)— The American Road & Transportation Builders Association (ARTBA) Jan. 22 hailed a unanimous U.S. Supreme Court decision clarifying the proper jurisdiction for federal Clean Water Act (CWA) disputes.  The Court had been asked to decide whether complaints arising under the CWA should be heard by federal district or appellate courts.

The Court held that federal district courts were the proper venue for challenging CWA regulations such as the 2015 “Waters of the United States” (WOTUS) rule.  As a result of the ruling, similar future regulatory challenges will now first be heard by the district courts.

ARTBA and industry allies asserted that CWA regulatory challenges should be defended at the federal district court level, which is closer to where the regulation impacts local projects and landowners. Proceedings that begin in district court also have more possibilities for appeal, and therefore, a better chance at reaching a correct decision.

The U.S. Environmental Protection Agency (EPA) claimed that requiring such disputes to start in district court is inefficient and wastes judicial resources. The agency said cases should begin in federal appellate courts.

The Supreme Court agreed with ARTBA and its litigation partners, stating that complaints regarding the WOTUS rule “must be filed in the district courts.”

While the ruling clarifies an important jurisdictional question, it does not impact or reinstate the 2015 Obama-era WOTUS rule, which is currently in the process of being repealed and replaced by the Trump administration.  ARTBA will continue to work with the Trump administration to ensure the 2015 regulation is repealed and replaced with a new regulatory mechanism which continues to protect, sustain and improve our nation’s infrastructure, while addressing the future CWA challenges.