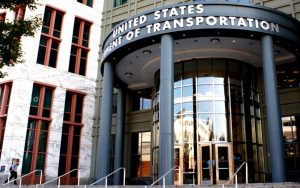 (WASHINGTON)— The American Road & Transportation Builders Association (ARTBA) has formally petitioned the U.S. Department of Transportation (USDOT) to repeal a 102 year-old federal procurement rule the group says has blocked, since its inception, the use of products that could improve safety and quality on the nation’s major roadways.

At issue is 23 CFR 635.411, a federal regulation that prohibits state and local governments from using patented or proprietary products on highway and bridge projects that receive federal funding unless those products qualify for limited exceptions.   The rule was adopted in 1916 by the U.S. Department of Agriculture, which then managed the nascent federal-aid highway program, over the strong objections of both the American Road Builders Association, as ARTBA was then known, and the American Association of State Highway Officials.

In its filing, ARTBA points out that since many new technologies—particularly those marking a significant advance in quality, performance, or durability—incorporate intellectual property, “the rule has inevitably impeded the development and deployment of products from the market that could save lives, minimize congestion or otherwise improve the quality of our nation’s highways.” It cites examples including the use of composite materials and disc bearings for bridges, moveable traffic barriers, higher visibility signage and breakaway sign posts.

The association’s petition argues the rule was not directed by the governing statute, the 1916 Federal-Aid Road Act, nor was it ever subject to the Administrative Procedures Act’s rigorous public notice and comment requirements.  It further says there does not appear to be any factual record or official federal proceedings to support an objective rationale for the rule.

ARTBA also noted other federal agencies, including the U.S. Department of Defense, the Coast Guard and the National Aeronautics and Space Administration, have set up procurement systems that allow for the appropriate use of sole source contracts for patented or proprietary products to accomplish their missions.

“This regulation is a relic of antiquated early 20th century thinking,” ARTBA President Pete Ruane says.  “It is out of step with the Federal Highway Administration’s support for the development and procurement of the best products on the market.  Repealing it would spur the use of new technology and materials that help save lives and upgrade the quality of our highways and bridges.”

If the USDOT accepts the petition, the agency would then formally propose to withdraw the rule, with allowances for public notice and comment.  The goal, ARTBA says, is new federal direction that promotes, rather than stifles, the use of innovative products and techniques in the transportation infrastructure market.

ARTBA is being assisted in the petition action by the Washington, D.C., law firm, Venable, LLP.  The Venable team is led by former U.S. Secretary of Transportation James Burnley.

By Eileen Houlihan|2018-08-22T13:09:55-04:00March 28th, 2018|2018 Press Releases, Government Affairs|Comments Off on ARTBA Moves to End Federal Procurement Rule That is Stifling Use of Innovative Products in State Highway Programs