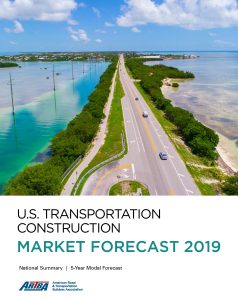 (WASHINGTON)— The U.S. transportation infrastructure market is expected to grow 4.2 percent in 2019, according to the annual economic forecast released Dec. 5 by the American Road & Transportation Builders Association (ARTBA).

Total domestic transportation construction and related-market activity is projected to reach $278.1 billion, up from 2018’s $266.9 billion, after adjusting for project costs and inflation.

The transportation construction market also grew by 4.2 percent in 2018 compared to 2017, driven largely by gains in airport terminal and runway construction, which increased by $5.8 billion, or 33 percent.  Spending on public highway and street construction rose by $2.7 billion in 2018.

Dr. Black shared the findings in her multimodal forecast during a webinar for analysts, investors, transportation construction market executives, and public officials.

One wild card in the forecast, Black says, is the outlook for the scheduled 2020 reauthorization of the FAST Act surface transportation law and the ability of Congress to find additional revenues to support the Highway Trust Fund.  “If states start delaying transportation improvement projects in response to uncertainty over the future of the federal program, it will temper 2019 market growth,” Black said.

Although the overall U.S. transportation infrastructure market will see growth next year, the situation will likely vary significantly by state and region, according to Black.

Highway construction market activity is expected to increase in about half of the states and Washington, D.C. The market should be steady in another five states, with activity expected to slow down in the remaining 20 states.

Other market risks include uncertainty over material prices, increased labor costs and potential labor shortages in some regional markets.

Among the other findings in Black’s forecast:

The full forecast can be purchased at www.artbastore.org.

ARTBA’s forecast is based on a series of proprietary econometric models for each mode and analysis of federal, state and local data and market intelligence.

Established in 1902, the Washington, D.C.-based ARTBA is the “consensus voice” of the U.S. transportation design and construction industry.