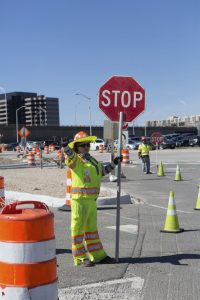 (WASHINGTON)—A landmark anniversary in the effort to improve traffic safety is being celebrated this year with the 40th anniversary of the creation of the American Road & Transportation Builders Association’s (ARTBA) “Traffic Safety Industry Division” (TSID). The anniversary was commemorated at the division’s recent annual summer meeting and social in Columbus, Ohio, held in conjunction with meetings of the American Association of State Highway and Transportation Officials (AASHTO) and the National Committee on Uniform Traffic Control Devices (NCUTCD).

Safety concerns have been paramount at ARTBA since its founding in 1902. By the late 1970s, however, the nation’s expanding highway network and growing number of motorists meant protecting transportation construction workers and the public required more attention from industry and government.

That’s why in 1979 ARTBA and its member firms formed the “Traffic Safety Industry Division” (TSID), splitting it from the Materials and Services Division. Its primary goals include:

“TSID members are world leaders in the development and distribution of transportation safety products,” said Brad Sant, ARTBA’s senior vice president of safety & education and managing director of the division. “Working through ARTBA, our members will continue to develop innovative products and advocate for their approval to save lives and prevent injuries among our workers and the users of our nation’s transportation systems.”

Many of the improvements that literally have changed safety around the world were developed by TSID members. Here are some examples:

TSID members have worked to influence Congress and federal agencies to develop programs and policies aimed at saving lives. The creation of the resource-rich National Work Zone Safety Information Clearinghouse (workzonesafety.org) is a great example.

TSID members also helped secure legislation to increase use of positive separation between workers and motorists during construction; ensure that funds allocated for roadway safety are not diverted to other programs; and shored up federal contract rules to allow for special consideration in contractor bids ensuring adequate safety devices are used on America’s roadways.

TSID continues to innovate and advocate for better and safer roadways. Recently, division members helped lead ARTBA’s efforts to repeal the 1916-era U.S. Department of Transportation (U.S. DOT) rule that stifles innovation by prohibiting use of proprietary products on federal transportation contracts. ARTBA formally petitioned the U.S. DOT to repeal the rule in 2018, and it is currently pending with the agency.

Established in 1902, and with more than 8,000 public and private sector members, Washington, D.C.-based ARTBA advocates for strong investment in transportation infrastructure to meet the public and business community demand for safe and efficient travel.