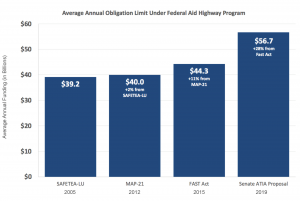 “The reports of the death of bipartisanship on Capitol Hill have been greatly exaggerated at least when it comes to transportation policy.

“The committee’s early action is a critical first step in the lengthy legislative process.  It’s also a welcome departure from the series of extensions and years of delay that have plagued the last few surface transportation bills.

“We urge the Senate Commerce, Banking and Finance Committees to take timely action early this fall on their respective policy and financing components of the measure.  Final passage of a bill this year provides a meaningful opportunity for members of Congress and the Trump administration to deliver on the infrastructure investment promise they have been making since the 2016 elections.”

Established in 1902, ARTBA is the consensus voice of the U.S. transportation design and construction industry in the Nation’s Capital.