The Marine Transportation System (MTS) is an integral component of the nation’s intermodal transportation network. Ports, waterways and related‐landside intermodal connectors serve as vital links for international and domestic trade, and play an important role in the nation’s economic and national security. The ARTBA Ports and Waterways Council (PWC) includes members of the engineering, heavy construction, material and supply, and dredging industries. By utilizing the strength and experience of ARTBA members working in this sector, PWC will provide a comprehensive “industry” voice for the importance of increased investment and improvements in our nation’s MTS and the resulting economic vitality. The ARTBA PWC provides a forum within ARTBA for the discussion and advancement of ports and waterways related issues. Its primary mission is to develop and advocate consensus transportation design and construction policy positions, recommendations and programs aimed at growing a well‐funded and efficient infrastructure market for the U.S. Marine Transportation System.

The MTS is made up of three‐principle infrastructure components:

The political and financial climate for transportation infrastructure in the U.S. is a challenge. The cumulative impact of the debt ceiling legislation, the loss of highway trust fund firewalls and the erosion of gas‐tax revenues due to improved vehicle mileage standards have turned a weakened infrastructure industry into one fighting for its own survival. The promise of the 1986 water resources authorization is not being met as the Harbor Maintenance Tax (HMT) – and the Harbor Maintenance Trust Fund (HMTF), which the HMT supports – a general revenue tax intended to be used for harbor dredging, has effectively been diverted to deficit reduction. Finally, many critical port connectors cannot easily or fully access significant federal, state or regional funding sources. The Ports and Waterways Council of ARTBA recognizes this dire environment, but also has identified the ports and waterways sector as one that can:

The congressional environment for transportation specifically and infrastructure is uncertain. Federal surface transportation and federal aviation authorization efforts continually face delays and find themselves subject to repeated extensions. While recognizing the severity of the intertwined budget and debt problems, the Ports and Waterways Council was created by ARTBA to advance the cause of both the infrastructure industry and the economic revitalization of the U.S. The Ports and Waterways Council recommends five major programmatic initiatives to achieve these important goals: 1. Development of a National “Critical Commerce Corridors” network to better link the U.S. to the global economy. 2. Adequate funding and financial tools to support the maintenance and operation of existing facilities, as well as new investments to enhance and expand the domestic economy. 3. Proper attention to, and support of, exports and export industries. 4. Streamlined regulations and oversight procedures. 5. Education of Congressional membership on the value of the ports and waterways to the U.S and the U.S. economy.

ARTBA has proposed the creation of a dedicated program to plan, fund and implement a national network of “Critical Commerce Corridors.” The 3C network is intended to be financed through the imposition of freight‐related user fees in order to ensure the efficient, secure and globally competitive movement of freight in the U.S. Ports and waterways are key freight origin and destination points, and have undertaken numerous efforts similar to the 3C proposal. For example, the Harbor Maintenance Tax has supported major dredging efforts across the country, while some seaports have supported rail improvements to simultaneously grow and to reduce urban congestion (e.g. Alameda Corridor). Ports and waterways, including landside connectors such as intermodal facilities and inland ports, need to be leading elements in any 3C network. Any user fees need to benefit those who pay the fees, and such fees must not disadvantage any mode or region, while promoting overall economic growth. The Ports and Waterways Council therefore recommends that: 1. A national Critical Commerce Corridors program should explicitly include major ports, waterways and inland road and rail connectors as part of an integrated supply chain. 2. A Critical Commerce Corridors program should incorporate existing user fees such as the Harbor Maintenance Tax and the Inland Waterway Fuel Tax, and that such taxes and fees should be “firewalled” and/or “off‐budget” and utilized fully for their current intended purpose. 3. A Critical Commerce Corridors program, or one like it, should drive the Army Corps of Engineers’ water resources annual work program and capital outlay programs with clearly defined goals of global competitiveness for both imports and exports. 4. ARTBA continues to support and advocate for increased funding of ports and waterways infrastructure projects that provide benefit to the nation’s critical freight network.

Ports and waterways have supported the imposition of various local, state and federal user fees. Unfortunately, the federal user fees have followed a well‐trod path and have accumulated substantial balances that are used to mask the size of the federal budget deficit. With the elimination of most budget “firewalls,” this practice is likely to increase, and Congress may raid these trust funds in order to meet budget and debt mandates. Unlike highways, transit or rail, port and waterway improvements are not generally eligible for low‐cost federal financing programs such as TIFIA or RRIF and many critical “last mile” roadway connections to U.S. ports are not included in the National Highway System. Yet these port and waterway improvements support substantial, long‐term employment and economic growth in manufacturing, agriculture, mining and logistics—not just one‐time construction jobs. The Ports and Waterways Council therefore recommends that: 1. All federal user fees for ports and waterways, including Harbor Maintenance Taxes and Inland Waterway Fuel Taxes are “firewalled” and/or “off‐budget.” 2. ARTBA work with the Army Corp of Engineers to determine appropriate deadlines and recommendations for the obligation of such user fees and contractual commitments. 3. Port and waterway improvements be granted access to federal financing programs comparable to TIFIA and RRIF. 4. Port and waterway improvements remain eligible for all major federal grant programs, such as the TIGER program. 5. The ARTBA PWC work in partnership with the Dredging Contractors of America, the American Association of Port Authorities, and other maritime industry groups to advocate for funding increases in future Water Resource Development Act legislative efforts and in the annual Corps of Engineers budget and annual program of work.

The National Export Initiative is a critical element in both the short and long‐term economic recovery. The drive to reclaim the American export heritage cannot succeed without an efficient, secure, globally competitive supply chain that moves bulk commodities, containerized goods and large capital intensive products. This effort is critical to reducing the national trade deficit—a chronic economic disease every bit as challenging as the federal budget deficit. 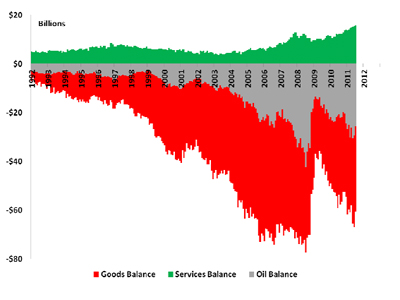 The growth of manufactured imports has reduced the cost and increased availability of many manufactured goods. While additional investments will be necessary to maintain and improve the import supply chain, the end‐to‐end supply chain for imported goods is highly efficient and economical, largely due to significant public and private investments over the last three decades. The same cannot be said for the export supply chain in the U.S. In fact, many exportable products from the U.S. cannot compete globally due to export supply chain limitations in the U.S. Routine maintenance dredging of the Mississippi is not fully funded, and scores of seaports and Great Lakes ports have inadequate harbor channel depths. Hundred‐year old locks stand in disrepair. Bridge clearances and weight restrictions add time, cost and risk to bulky equipment exports like turbines and construction equipment. Rail access to inland waterways and seaports is constricted at dockside and near‐dock locations, and often limited during seasonal peaks. All of these situations weaken the export supply chain and the economic competitiveness of the U.S. Other countries support and sometimes subsidize their export supply chains. This is a market advantage for those export producers, whether manufactured, farmed, harvested or extracted. Special attention needs to be paid to the export infrastructure in the U.S., perhaps as part of the Critical Commerce Corridors initiative. This is an essential ingredient in the short and long term economic recovery of the U.S. The ARTBA Ports and Waterways Council therefore supports: 1. An immediate federal effort is made to identify short and long term port, waterway and inland connector improvements to the export supply chain as part of a national Critical Commerce Corridors program. 2. Active engagement with the National Export Initiative and the American Association of Port Authorities to determine additional ways ports, waterways and inland connectors can support the growth of U.S. exports. 3. Immediate funding and implementation of short term improvements to the export supply chain.

It is often alleged that the U.S. has the riskiest regulatory climate in the developed world, in part because of the myriad local, regional, state, federal and private approval processes. There is truth to these allegations, particularly with respect to major dredging projects and major improvement projects that involve multiple federal agencies. There is much discussion among transportation advocates in the U.S. House and Senate advocating multiple streamlining efforts in surface transportation regulations and policies, asserting that time saved on a project is money saved on a project. This same approach should be applied to port, waterway and inland connector projects. The ARTBA Ports and Waterways Council therefore recommends that: 1. Federal regulatory and procedural streamlining efforts are extended to port, waterway and inland road and rail connector improvements. 2. Congress ensures that lack of federal funding and diminished staffing will not impede or delay project reviews and approvals.

Education is a necessary component of any well‐rounded advocacy effort. To that end, the ARTBA Ports and Waterways Council will not only advocate strongly for the above policy positions, but will monitor and offer input on future political developments relevant to the sector. The PWC will serve as a leading educational voice for greater market promotion and to share the importance of the Marine Transportation System as a vital aspect for strong national security. In addition, the PWC will provide analysis, advice, comments and suggestions to relevant interests about the importance of the MTS for job creation and the overall economic vitality resulting from investments in the ports and waterways sector.